The Annual Harry Street Lecture takes place each year. Harry Street was a well-known British jurist and legal scholar, who spent much of his life at the University of Manchester.

The Harry Street Lecture has run every year (with few exceptions) since 1985 and has been given by an impressive roll call of leading figures from the worlds of law and politics, including Baroness Hale, Dominic Grieve QC MP, Professor Dawn Oliver at UCL, our own Professor Rodney Brazier, Bishop James Jones, Chair of the Hillsborough Panel, Lucy Powell MP and Andy Burnham, Mayor of Greater Manchester.

More information about Harry Street’s life and career is available at this link. 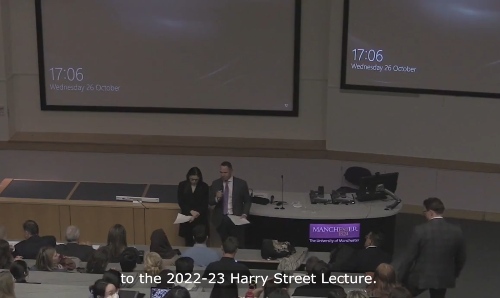 The School of Social Sciences was delighted to welcome Nazir Afzal in Manchester on Wednesday, 26th October 2022.

Nazir Afzal is one of the UK’s leading advocates for social justice and spent many years with the CP. He later joined the Association of Police and Crime Commission (leaving to comment more freely on the Manchester Arena Bombing) and the Independent Press Standards Organisation. Throughout his career he has doggedly fought for the rights of women and children, especially those from minority ethnic and religious backgrounds, but has been a voice for the vulnerable more generally. He has been outspoken on forced marriage, honour killings and female genital mutilation.

From his own early experiences of racism and bullying onwards, Nazir understood that the criminal justice system, functioned to marginalise and exclude certain groups of people. He also rapidly came to perceive that both the problems and solutions were nuanced and complex, a reality that he would dramatically confront when prosecuting the Rochdale Child Sexual Exploitation cases.

Nazir is also the independent Chair of the Catholic Church’s Safeguarding Agency and is currently conducting an independent review of the culture of London Fire Brigade for the Mayor of London.

His talk engaged with the question of why the current justice system is broken, as well as the legacy of Rochdale. What can we do to make all citizens truly equal before the law, regardless of age, gender, class, ethnicity, sexuality, religion, or culture?

The talk was followed by a question and answer session.